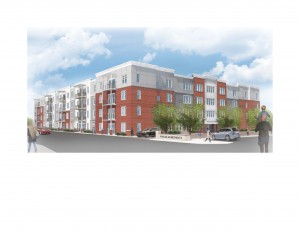 Nexus Properties, the developer behind much of Rowan Boulevard, will soon start construction on another downtown Glassboro project. According to plans submitted to the borough, Nexus seeks to build a single 4 story 125 unit apartment building on a section of currently undeveloped land along Poplar Street. The project is not affiliated with Rowan Housing.

Originally named Summit Square, the development was planned to have 52 town-homes, however only 15 units were ever built. Nexus purchased the land from D’Anastasio Corporation who had ceased constructing at the subdivision in 2013.

Nexus received the go-ahead from the Glassboro Planning Board on August 7, 2018, with work on the last phase of Rowan Boulevard coming to a close. The plan had previously faced opposition from some residents of the current Summit Square town-homes who feared their street could not accommodate such a high density project.

In its approval, the planning board stipulated Nexus provide fencing and tree buffers between existing properties and the new structure.

“I want it to be a college town so bad and it could clash.” Culkin said. But, in terms of business impact, Culkin said, “I’ve lived here during the past two summers and it’s definitely bad for business when students aren’t here.”

According to Ronda Abbruzzese, the Nexus Properties vice president of marketing, the company hopes to start construction by the end of September or early October.

“We are excited to expand our market rate availability and presence in Downtown Glassboro,” Abbruzzese said. “Currently we have 114 market rate units and they are 100 percent leased. When one opens up, it goes within an hour!”

Architectural designs were handled by Blackney Hayes Architects, the same Philadelphia firm that designed Nexus’s other Rowan Boulevard properties. The building will consist of 98 one-bedroom units and 27 two-bedroom dwellings. Luxury features include balconies, a pool and a gaming space. 136 parking spots are provided on site. Additional spots will be made available in the Mick Drive garage, located about 200 yards from the building. 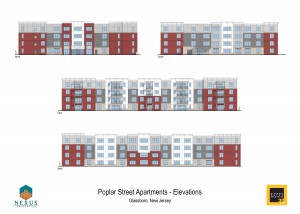 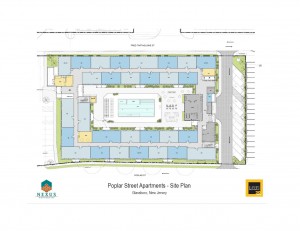