GLASSBORO – Barnes & Noble was once an island on Rowan Boulevard. The bookstore — selling Rowan University textbooks and swag — was the first to go up less than a decade ago.

Seven years later, the massive two-story bookstore isn’t so easy to pick out of the downtown Glassboro landscape. It blends perfectly with the half-dozen buildings that sprang up around it since it opened in 2010. 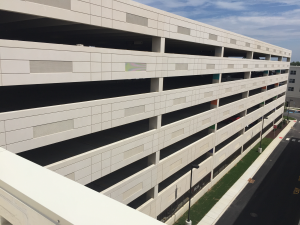 A 935-space parking garage on Mick Drive is the second garage to open on the strip.

Four more buildings expand classroom and student housing space for the university, increasing the number of student beds by 557 in two buildings — 230 Victoria and 223 High — where students will live starting in September. 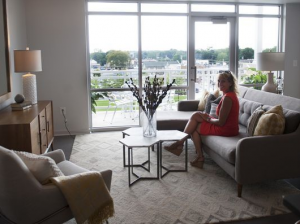 “I’m thoroughly impressed every day with how quickly these buildings go up,” Abbruzzese said.

The new building cluster — all a mix of residential  and retail space — were completed in 16 months. 220 Rowan Boulevard, a housing and retail building opened in 2016, went up in just 14 months, according to Abbruzzese.

“We wanted to give the community the feel of a college town,” state Sen. Stephen M. Sweeney said at a ribbon-cutting ceremony.

“When I pulled up today, that’s exactly what it felt like.”

Construction on the final phase of Rowan Boulevard went on behind the state Senate president as he spoke from the podium. The last piece of the boulevard is expected to open in July 2018.

The ceremonial opening of the buildings — called the “A3” phase of construction — is the second -to-last piece of the puzzle for the 26-acre plot Glassboro set aside to redevelop the downtown zone. More than 90 houses — including many belonging to fraternities and sororities — were razed to make room for the project.

“I joined this university in 2006, and let’s just say this town was not the most impressive-looking town in the neighborhood,” Rowan University President Ali Houshmand recalled.

“We were a very small institution, not very well known, even in Philadelphia. … I never expected from a small town, a sleepy-type town, a suburb of Philadelphia, would be one of the leaders.”

Glassboro, the university president said, “will be a glorious town.”